In my last post I made the case that programmers should try and write their software in a way that makes reasonable use of the resources of the computer. By reasonable use, I didn’t mean to try and perform every crazy micro-optimization possible to extract every last speck of performance from the machine: instead, I meant to have mechanical sympathy and to write software in a way that works with the hardware rather than against it.

That article had an example of how being mindful of the CPU cache can make one algorithm nearly 16 times faster than another, even though they have the same complexity. I’ve been wanting to find a more real-world example and this week one just feel in my lap.

A year ago, Mark Litwintschik wrote an article where he extracted the domain name from a 12 GiB gzip file containing 1.27 billion lines of JSON and created an ip,domain CSV file. That program was written in Python and took more than a day to run!

Last week, he wrote a follow-up article detailing a new program to do the same job, but written in Rust. The new version processed the data in 48 minutes. After he shared his article on lobste.rs, Mark received suggestions to make the program faster and has since brought the processing down to 30 minutes. His new program is 50 times faster than his original — a much better use of the machine’s resources! And yet, when I initially read the article, I thought that 48 minutes sounded slow.

I started working on this before Mark updated his post with the 30 minutes program. But even if I had read the article after he updated it, I would have still thought that 30 minutes sounded kind of slow.

Thankfully, Mark’s article gave links to the dataset and to the third-party library he was using, and he shared his code and the bash commands he ran. It made it easy to replicate his experiment.

The first thing I did was very simple: I timed how long it took to zcat the input. This would help me gauge how long steps 1 and 4 took together. I wanted to know if I was right to think that 48 minutes was slow or if my expectations were wrong.

Mark's article splits the original 12 GiB file in 4 parts and runs 4 parallel instances of his program on the shards. That's why I use shards to do my timings.

So roughly a minute and a half to decompress, read, and write. I didn’t think that parsing JSON would be much slower than decompressing a gzip file, so most of the time has to be spent in phase 3, extracting the domain name. Since the operation sounds quite simple and straight-forward (find the longest top-level domain suffix, take the substring to the left until a period of the beginning of string is encountered), I suspected that something was probably being wasteful there.

Next, I ran Mark’s original program to know how long it took to run on my machine.

I like to use `perf stat -dd` instead of `time`; it gives a more complete picture

So 27 minutes (instead of 48 like Mark) on my machine. While the program was running, I also ran perf top to look at which functions were taking the most time. 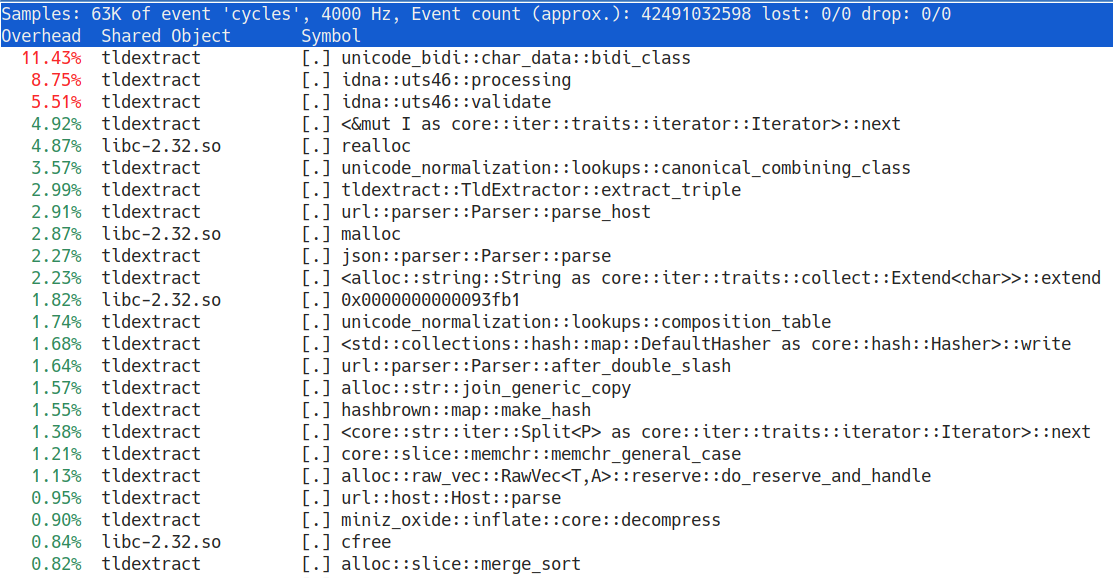 When I skimmed the original program and the third-party library, I thought that they allocated a lot. For example, the .lines() iterator allocates a new string for every line of input and when the line goes out of scope, it’ll be freed. That’s 1.27 billion pairs of allocation and deallocation. With malloc/realloc/free taking nearly 10% of the total execution time, it seems that’s a problem.

But the real big problem is in the third-party library to manipulate domains. Since domains are allowed to have Unicode in them, a lot of time is spent in IDNA code. But is that really necessary? Does the data that we manipulate require that we impose the extra cost of Unicode domain names upon us?

What I found by looking at the data is that all the JSON objects contain only ASCII characters and only 20 objects out of 1.27 billion contain the substrings \u or \U (JSON unicode escape sequences). That means that the original program is using a library that makes processing the whole batch a lot slower for the benefit of only 0.00000157% of the entries. Instead of solving the generic case, let’s solve the common case.

Bash commands to search for Unicode in the data

So given what we know, here’s the plan for a (hopefully) faster program. Like the original program we’ll use flate2’s GzDecoder to decompress the data. We are not going to use the lines iterator, instead we’re going to use BufReader.read_line() which allows us to re-use the same buffer. When we have a line, we’re going to search for the substring \u; if it’s found, we write that line to a file called rejected.json that we can process separately and move on to the next line. We’re going to use serde_json instead of json, because it’s faster. To find the top-level domain, we’ll have a HashSet of all the domain suffixes (obtained from here) and we’ll find the longest suffix we can; once we have it, we can extract the string to its left. Finally, we write out to stdout, but not with println!, but with a pre-locked Stdout object.

2 minutes and 35 seconds; 10 times faster than the original program and less that twice the time to just `zcat`.

Now the final test, how long does it take to transform the four shards in parallel?

It’s slower than just one shard at a time (I haven’t yet investigated why that is; my guess is that we’re maxing out the write speed of the disk) but still nearly 10x faster than the original program. And I think we did things that most programmers would be able to do:

And I think that the final program is something that most people reading this would probably have been able to do themselves.

If you’d like to look at my code, it’s available on Github.